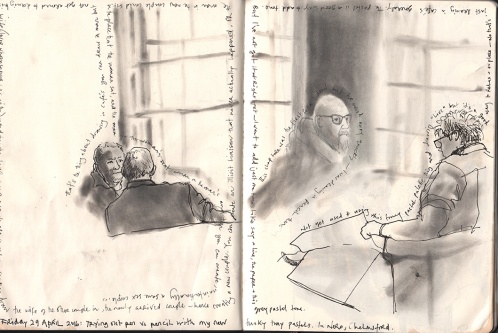 So today I took some time out (I had to go to the bank) to draw in a cafe again. I tried out a new medium I came across in an art shop in Bologna – a lovely pastel stuff that comes in a flat palette and can be applied very smoothly if you wish. I suppose I’ve sort of been on the look out for something that I can use whilst out and about – a dry, moveable media – something that can be used to apply a large area of tone or colour and I think I may have found it.

It’s nice stuff (not cheap). It’s applied using a sort of plastic palette knife for which you can buy replaceable foam covers – the foam is exactly the same as that used for make-up sponges. In fact, I’d bet it was invented by someone who used their make-up whilst out drawing and realised it worked a treat. I could use graphite powder (I usually do), but this stuff is very stable, moveable but more stable and less messy than graphite.

They’re called Pan Pastels and I think it has much potential. How about you…?