My local illustrator’s group meets about once a month and we set each other briefs. Due to being on the MA I’ve been spectacularly bad at completing any of these mini-projects but I am determined to try now that the MA is finished (I got a distinction by the way, I’m pretty chuffed).

Anyway our last ‘homework’ as it’s affectionately known, was to develop or draw a monster. I can’t recall which of us set this brief. This blog post is about my attempt.

The image above is a sketchbook page of doodlings. I often doodle this kind of thing and I get bored with the same old stuff emerging from my brain. Originally the most interesting to me was the ‘worry monster’ clasping it’s hands together in the centre, however it’s also worth noting the dog in the bottom left (for reasons that will become clear later).

They are all fairly cuddly, friendly looking monsters and none really inspired me, so I drew this page next:

Trying to make a more scary type of creature, the one in the bottom right emerged; but it all seems a bit clichéd and I’m getting bored again. Although I like the floppy-sort-of-bouncing-along-sort-of alien (I’ve ALWAYS loved aliens).

A while later, I decided on a different approach. 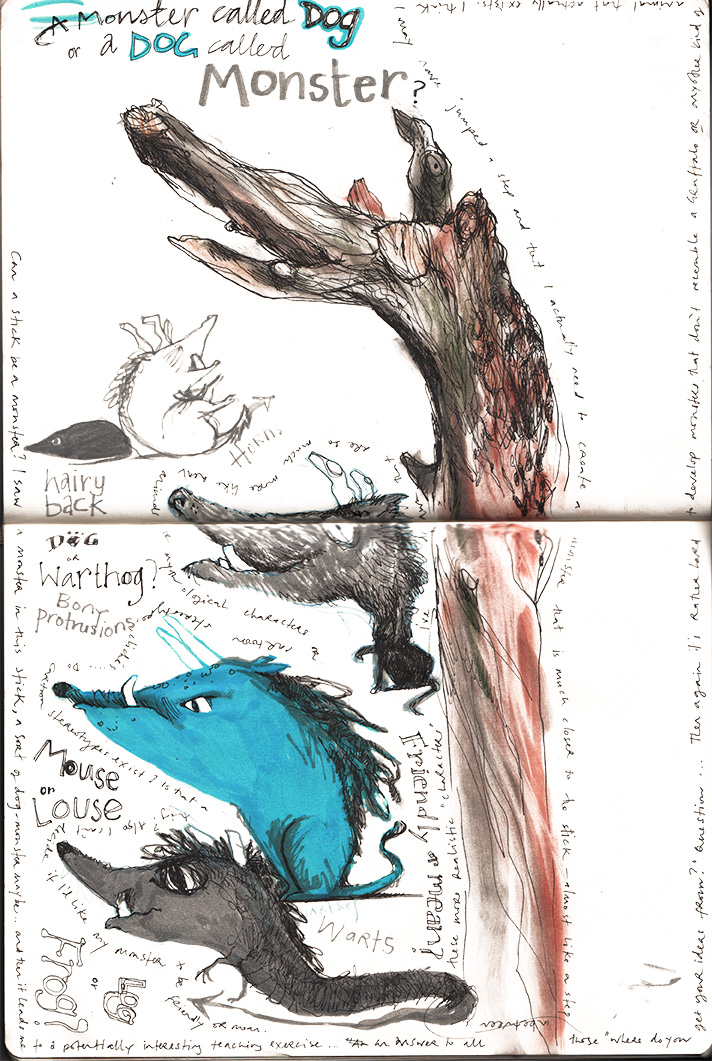 I found this stick in the woods and thought it looked like a monster’s head. Ah, an excellent shamanic stick  I thought (all shamans have sticks, right?). Maybe one day I’ll get around to decorating it with feathers, beads, chicken heads and stuff. For now, I thought I’d use it as a starting point for my monster ideas. The sketchbook page is above.

I also realised that this would probably make quite a good educational art activity: take the students outside for a walk in the woods, look for interesting sticks, stones or whatever – then draw them, slowly developing them into characters. Maybe breaking the task down, like ‘Where are it’s eyes?’, ‘is it angry, sad, frightened or frightening?’ etc.

Anyway, below are a few biro sketches I did really quickly, say no more than ten minutes, to try and put down an idea for a character. This is where we go back to the horned dog sketch from the first page because that idea has been there all that time – the idea of a cute sort of a dog called Monster, that perhaps has two little horns.

The trouble with me is that I am always getting ideas for characters – it takes a little more self-discipline to develop the story. Is there any money in just making up characters?

The Terrier-Type is closer to how I feel Monster should look. The big shaggy Monster at the top just reminds me of Clifford the Big Red Dog, and I don’t want anyone drawing parallels with that.

I’m going to develop this further. When I do, I’ll blog about it.